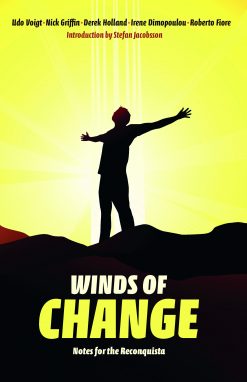 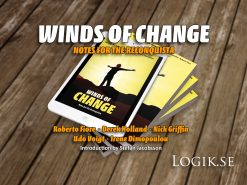 In this anthology, several leading European nationalists write about how the winds have now changed, and how a radical political change is about to happen in Europe.

”’We need to be ready for the change. We need to be ready to seize the moment and ride the tide. To do so, we need to create the new generations of political soldiers, of Europeans – who have the capacity, the moral compass, the knowledge and the practical skills to fulfil their duty to Europe and its people.’

We live in exciting times. Successions of stunning electoral defeats for the forces of liberalism are symptoms of a citizens’ revolt against the elites and their democratic deficit. These populist rebellions are incoherent, powerful yet literally reactionary, responses to globalism. The millions of citizens who have slapped the elites in the face know what they are against, but have no guiding vision of what they are for. The resulting lack of direction is very dangerous. The globalists have been shaken to the core, but they are already regrouping and planning their counter-attacks. This renewed danger can only be met if the forces of tradition and identity develop a coherent, positive vision for a better future. Populist revolts are not enough. For secure, lasting victory they have to be transformed into full-scale National Revolutions. But there can be no revolution in action without first a revolution in ideas and in the hearts of future revolutionaries. This book represents a vital step on the road to creating a winning National Revolutionary ideology for the 21st Century.”

Introduction by Stefan Jacobsson
Udo Voigt: Who are the real enemies of Europe?
Nick Griffin: An introduction to Distributism
Derek Holland: The Political Soldier
Irene Dimopoulou: Conquering fear in order to Win
Roberto Fiore: After the night – the Dawn
Nick Griffin: Reconquista: The 100 years war and the only way to win it
About the authors

Stefan Jacobsson: Has been involved in different nationalistic projects since he was 16-years-old. During 2013-2015 he was Chairman of Svenskarnas Parti (Party of the Swedes). In November 2015 he was elected as Secretary General of the Alliance for Peace and Freedom. He also works with the Swedish Publishing House Logik Förlag.

Udo Voigt: Joined the NPD (National Democratic Party of Germany) in 1968. He served as the leader of the party from 1996 to 2011. He has been a Member of the European Parliament since 2014. By profession he is a former aviation engineer and a captain in the German Air Force. He has a Master’s degree in political science from LMU’.

Nick Griffin: Joined the National Front at the age of 14. He joined the BNP (British National Party) in 1995 and led it from 1999 to 2014, acknowledged as “the most successful leader in the history of British nationalism”. He served as a Member of the European Parliament from 2009-2014. He is the Vice President of the Alliance for Peace and Freedom. He has an MA in Law from Downing College, Cambridge, where he boxed for the university. Father of four grown-up children.

Derek Holland: Joined the National Front as a teenager and was active while at university in Leicester, where he gained a History degree. Proud of his Irish heritage, he was an inspirational speaker and influential writer during the years of the ‘cadre NF’. He went on to become a co-founder of the International Third Position. He now lives in Ireland where he is heavily involved in a campaign to help families in debt.

Irene Dimopoulou: Attended the French Institute in Athens and the University of London. Graduate in Psychology, Classics and Archaeology, English and French language. She worked in Greek TV presenting her own international news programme. While in college she began writing in the Christian-Nationalist newspaper Stochos (Target). Since then she has written for the publications Golden Dawn, Free World and Counter-Attaque. She is now Director of the weekly newspaper Empros (Forward). She is married to Member of Parliament and Parliamentary Representative (Golden Dawn) Chris Pappas, and the mother of three children.

Roberto Fiore: Father of 11 children. A leader and role model in Italian nationalism from a very young age, he was a key founder of the revolutionary nationalist Terza Posizione (Third Position) until forced into exile in London, where he lived for nearly twenty years and built several successful businesses. Returning to Italy in 1999 when his name was cleared, he was compensated for having been wrongly accused and formed Forza Nuova. He sat for one year in the European Parliament between 2008-2009, when he replaced Alessandra Mussolini when she was elected to the Italian Parliament. He is now the President of the Alliance for Peace and Freedom.