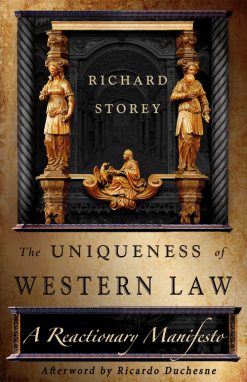 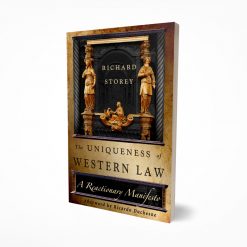 The Uniqueness of Western Law

Defending an original interpretation of libertarian theory, Richard Storey, taking his bearings from the work of groundbreaking thinkers like Ricardo Duchesne and Hans-Hermann Hoppe, builds on his opening premise that libertarianism is ‘only a theory of law’, to show precisely what this deceptively simply formulation really contains. Unfolding the ramifications of libertarian thought — on everything from nationalism, statism and multiculturalism to our understanding of the history and politics of the West, from democracy and terrorism to womanhood and fatherhood — Storey’s work offers challenges to the defenders and critics of libertarianism alike, and above all, opens new territory for consideration of the great challenges confronting the West at this historical moment.

All too many libertarians misconstrue the philosophy they are explaining. Not Richard Storey. He correctly states that libertarianism is solely a theory of just law. This chapter alone is worth the entire cost of admission. As a contrarian myself, I take my hat off to this author for his fearlessness and bravery. — Walter E. Block, Ph.D., Harold E. Wirth Eminent Scholar Endowed Chair and Professor of Economics, Loyola University New Orleans

2. The Uniqueness of Western Law – A study of the origins and history of natural law

3. Estopping State Systems of Government – A logical proof of the irrationality of state systems of government

6. Folk-Right versus Multiculturalism – An analysis of the superiority of blood-right citizenship (jus sanguinis)

1. In Search of Non-White Philosophers – A discussion of the minimal philosophical achievements outside of European civilisations

2. Why There Are No Successful Black Nations…Yet! – What principles should African nations take from the West?

3. Why Libertarianism Is Unique to “The West” – What makes European civilisation different?

4. Source of the Faustian West – A hypothesis of the evolution of the unique culture of the West

5. Is There a European Personality Type? – An introduction to diverging European MBTI results

6. Why Do Whites Choose White Guilt? – Explaining the modern phenomenon of ‘white guilt’ in terms of the Faustian spirit of the West

2. The Neocon Slave Ethic – Neo-conservatism does not represent the strength of Western civilisation

3. Democracy Isn’t Working – A summary of the inferiority of the presently popular system of state government in the world

4. Europeans Want Hungary, Not Sweden – The stats have spoken

5. Why the West Can’t Unite Against Terrorism – The consequences of abandoning Christianity

6. The Correlation Between State-Growth and Mass Irresponsibility – An argument for subsidiarity

1. Why Women Are the Unfairer Sex – Discussing a scientific study which shows men are more sociable

3. How to Be a Good Father – The importance of the traditional father in fulfilling basic human needs

4. Why Fighting Is Good for Men and Boys – Instilling pride, respect and hopefully responsibility the way nature intended

Addendum—Fifteen Steps to Restore the West