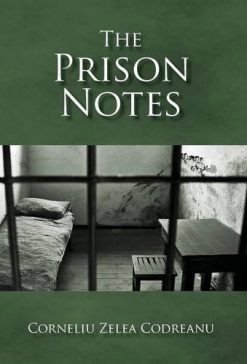 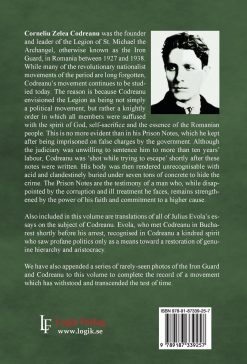 Here we present the Romanian leader’s note before he was murdered by the state. The book also contains a wealth of photographs and translations of Julius Evolas articles about the man who formed the Iron Guard.

From the back cover:
”Corneliu Zelea Codreanu was the founder and leader of the Legion of St. Michael the Archangel, otherwise known as the Iron Guard, in Romania between 1927 and 1938. While many of the revolutionary nationalist movements of the period are long forgotten, Codreanu’s movement continues to be studied today. The reason is because Codreanu envisioned the Legion as being not simply a political movement, but rather a knightly order in which all members were suffused with the spirit of God, self-sacrifice and the essence of the Romanian people. This is no more evident than in his Prison Notes, which he kept after being imprisoned on false charges by the government. Although the judiciary was unwilling to sentence him to more than ten years’ labour, Codreanu was ’shot while trying to escape’ shortly after these notes were written. His body was then rendered unrecognisable with acid and clandestinely buried under seven tons of concrete to hide the crime. The Prison Notes are the testimony of a man who, while disappointed by the corruption and ill treatment he faces, remains strengthened by the power of his faith and commitment to a higher cause. Also included in this volume are translations of all of Julius Evola’s essays on the subject of Codreanu. Evola, who met Codreanu in Bucharest shortly before his arrest, recognised in Codreanu a kindred spirit who saw profane politics only as a means toward a restoration of genuine hierarchy and aristocracy. We have also appended a series of rarely-seen photos of the Iron Guard and Codreanu to this volume to complete the record of a movement which has withstood and transcended the test of time.”

Review by Lucian Tudor at The Occidental Observer

Review by Greg Johnson at Counter-Currents