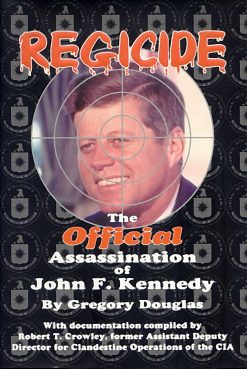 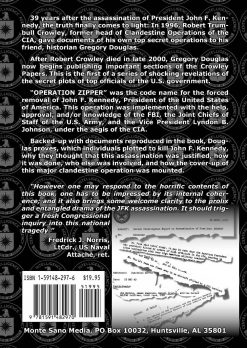 39 years after the assassination of President John F. Kennedy, the truth finally comes to light: In 1996, ROBERT CROWLEY, former Deputy Director of Clandestine Operations of the CIA, gave documents of his own top secret operations to his friend, historian Gregory Douglas. After Robert Crowley died in late 2000, Gregory Douglas was free to begin publishing important sections of the Crowley papers. Backed up with documents reproduced in the book, Douglas proves which individuals plotted to kill John F. Kennedy, why they thought that this assassination was justified, how it was done, who else was involved, and how the cover-up of this major clandestine operation was mounted.

REGICIDE recasts the loyalties, disloyalties, and covert plots of the U.S. intelligence community during the Kennedy administration in a new light. As is well known, the rise of Fidel Castro as communist dictator of Cuba led to a series of very dangerous confrontations with the U.S.— the failed Bay of Pigs invasion and the subsequent Cuban Missile Crisis being two of the best known events. It is less well-known that both the U.S. Joint Chiefs of Staff and the CIA were plotting to drag the U.S. into open hostilities with Cuba by staging ”Cuban aggressions” and to intentionally cause ”collateral damage” outside and inside the U.S. In other words: to kill innocent civilians, including U.S. citizens, and blame it on Castro in order to supply a reason for a military invasion of Castro’s Cuba. When U.S. President John F. Kennedy discovered this treasonable program, he intervened and prevented what would certainly have triggered a nuclear world war. In order to prevent another such clandestine intelligence horror, Kennedy felt strongly that it was an urgent necessity to circumvent both the Joint Chiefs of Staff and the CIA who were obviously determined to force a dangerous war on his administration and on the country.

”OPERATION ZIPPER” was the code name of the assassination plot of John F. Kennedy, President of the United States of America. The 98 pages long paper entitled ”OPERATION ZIPPER Conference Record” is a long list of decisions and activities of various U.S. authorities in a CIA-conducted project. All major facts behind the Kennedy assassination are found in the ”Zipper” Document. For the first time, the motives of those who organized and instigated the act are clearly and decisively exposed, as are the names and official positions of those who directed the killers. This document was probably produced by the five CIA top officials mentioned in the distribution list (McCone, Angleton, Carter, Crowley, Harvey) in order to cover themselves, since this document clearly proves that the assassination of J. F. Kennedy was anything else but a private plot by a few CIA senior officers going rampant.

Among Robert Crowley’s papers is a 1978 in-depth analysis of a Soviet intelligence report on the assassination of President John Kennedy, prepared by the Defense Intelligence Agency, and dubbed THE DRISCOLL REPORT. At one time, the Russians were held suspect in this act, and in the intervening years, their intelligence organs had been compiling data in refutation of this thesis. It should be noted that Lee Oswald, the purported assassin, had defected to the Soviet Union and, while resident in that country, married the niece of an MVD intelligence officer. Although the DIA Report makes it very clear that Oswald was a source for the Office of Naval Intelligence and that his defection was spurious, his openly avowed Marxism, public support of the Communist government of Cuban dictator Fidel Castro, and his repeated pro-Communist utterances made him a very handy weapon with which to attack the Russians.