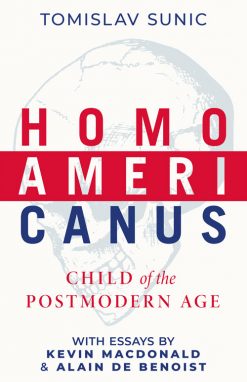 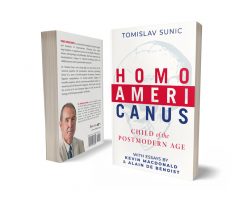 Child of the Postmodern Age

Homo Americanus is a powerful investigation into the origins and dynamics of Americanism. Drawing from many long-forgotten or suppressed sources in the fields of literature, history, anthropology and philosophy, this book represents an interdisciplinary critique of America’s founding myths, its riddled present, and its questionable tomorrow.

Dr. Tomislav Sunic casts strong light on many facets of the American question: the postmodern American psychology driven by a sense of Jewish-inspired chosenness, America’s linguistic manipulations, its techno-scientific religion of boundless progress, and the American geopolitical reality as a menacing and self-destructive hegemon, which puts not only the survival of its own European legacy at risk, but also the heritage of all European peoples worldwide.