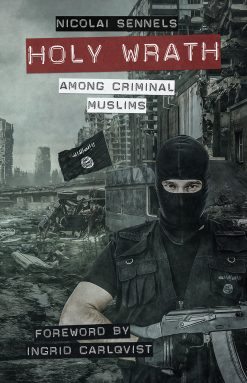 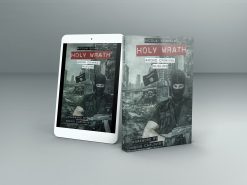 In 2008, the psychologist Nicolai Sennels was dismissed from his job at the juvenile facility Sønderbro in Copenhagen. During the years he worked there, he had made unique and startling discoveries while treating the inmates, mostly young Muslim men convicted of various crimes.

However, it was not primarily the scientific observations Sennels had made that cost him his job – it was the fact that his findings did not comply with the ”core values” of the Copenhagen Municipality. Attempts were made to gag Sennels, but luckily did not succeed. Thanks to a severance pay, he was able to devote his time to writing down his experiences, and the result is this book: Among Criminal Muslims.

Holy Wrath – Among Criminal Muslims, is an in-depth look at life behind the walls of the juvenile prison where Sennels worked for nearly three years. His story offers a singular opportunity to catch a glimpse of what goes on behind locked doors, and the book provides new insights into what criminal — and sometimes radicalized — young immigrants really say in the confines of the therapy room.

In his three years at Sønderbro, Sennels treated hundreds of young criminals in therapy. The book is based on these conversations, but also includes references to statistics gathered in research and surveys. The conclusions are not altogether pleasant, and some will no doubt find them offensive. But they are well-founded.

”The first time I read Nicolai Sennels’ book Among Criminal Muslims, I could almost hear the penny dropping in my head. Finally, here was an explanation for why Muslims behave badly in the eyes of Westerners. At last I understood where their aggression comes from, and I could dismiss all the politically correct talk about ’socio-economic factors’ and ‘exclusion.'”

– From the foreword by Ingrid Carlqvist