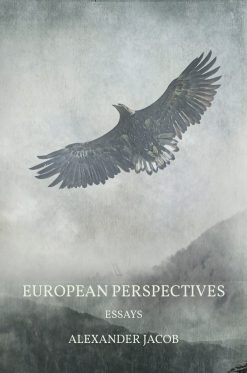 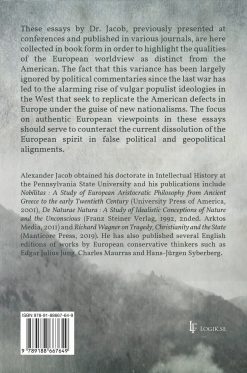 These essays by Alexander Jacob, previously presented at conferences and published in various journals, are here collected in book form in order to highlight the qualities of the European worldview as distinct not only from the Communist system but also from the American. The fact that the latter variance has been largely ignored by political commentaries since the last war has led to the alarming rise of vulgar populist ideologies in the West that seek to replicate the American defects in Europe under the guise of new ‘nationalisms’. The focus on authentic European viewpoints in these essays should help to counteract the current dissolution of the European spirit in false political and geopolitical alignments.

Alexander Jacob obtained his doctorate in Intellectual History at the Pennsylvania State University and his publications include Nobilitas: A Study of European Aristocratic Philosophy from Ancient Greece to the early Twentieth Century (University Press of America, 2001), De Naturae Natura: A Study of Idealistic Conceptions of Nature and the Unconscious (Franz Steiner Verlag, 1992, 2nd ed. Arktos Media, 2011) and Richard Wagner on Tragedy, Christianity and the State (Manticore Press, 2019). He has also published several English editions of works by European conservative thinkers such as Edgar Julius Jung, Charles Maurras and Hans-Jürgen Syberberg.